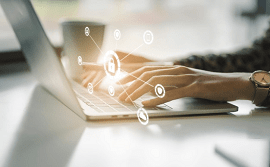 According to SEO Tribunal, there are about 5.6 billion Google searches per day! Either people are ridiculously hungry for knowledge or they just want to know where the nearest McDonald’s is. Whatever the case, people are turning to Google for answers. One of the many things people searched for are these keywords: CDN network definition.

To start, saying CDN network definition is redundant because CDN already stands for Content Delivery Network, so adding another “network” towards the end is overkill. But hey, isn’t that why people go to search engines? Because they don’t know any better? Lucky for you, this article will explore what CDNs are, why they’re important today, and who they’re for.

To thoroughly appreciate what CDNs do, let’s first talk about what they’re meant to improve—website speed. In other words, CDNs are designed to eliminate (if not only lessen) latency. Techopedia.com says, “latency is a networking term to describe the total time it takes a data packet to travel from one node to another. It refers to time interval or delays when a system component is waiting for another system component to do something.”

But how do CDNs make browsing websites much better, you ask?

To simplify, CDNs are a group of servers placed in many parts of the globe. These servers, found in Points of Presence (PoPs), then distribute a site’s data to the users near them. For example, BelugaCDN has 28 PoPs around the planet. You can check this map to know where they are.

By integrating a CDN to your website, your end-users enjoy premium browsing because of speed and quality. This is because they consume content from their edge server—the nearest one from where they are—and not the web host origin. So even if your web host is based in, say, Seattle, your users from Nepal, Quebec, and Frankfurt still get to access your website with the same snappiness those from Seattle experience.

CDNs are a massive deal for a lot of the biggest companies in the market today. JPMorgan Chase, for instance, is a great example of an empire that uses it. The financial institution makes use of online banking to better serve their clients. That being said, their customers can transfer funds, make investments, and clear checks simply by tapping into their smartphones. Because of CDN, the bank’s digital space is fortified and people who have accounts with them get to enjoy mobility and flexibility.

This wouldn’t be possible without a CDN, as their website would crash. Web hosts simply aren’t meant to accommodate hundreds of thousands of users simultaneously. Because their clientele is in the thousands, CDNs help evenly distribute their data so their web host is freed from the obligation of having to produce and look after each of their users. This also improves your site’s online aesthetics because your web host isn’t all that pressured to relay content to far distances. Users get to enjoy your content the way they were designed to and your media quality is retained.

All this established, speed and quality are integral components CDNs bring to the table. They reduce latency and allow for huge numbers of people to consume your content all at once. You’re guaranteed that your site doesn’t crash because you have the support of multiple servers.

They’re helpful because they allow businesses and creatives to expand their markets. Whatever industry you may belong to, being able to enter a digital region you don’t have physical access to is power. Whether your site publishes stories about the latest fashion finds or sells customized necklaces, being able to broaden your audience is advantageous if you’re bent on making more sales.

All these laid out, speed, quality, and market expansion are only some of the many reasons why CDNs can help your business.

Who are they for?

Basically, anyone with a website could use a CDN. The better question is, when is it wise to use one.

The answer lies on CDNs very purpose (or at least its initial one)—to distribute your content by improving loading speed for your global market all at once. If your site is accessed by users who are mostly near your web host server, then it might not be a healthy investment. If, however, your site garners a good amount of traffic and you have a growing following from a foreign country or a close region, then using a CDN would be smart.

There are plenty of CDN providers today, but signing up with BelugaCDN will present you with deals other CDN companies can’t give.